A writer’s mind is like a big ball of yarn. I’m not talking about one of those neat ones you see in the cartoons with every section in its place right where it belongs. I’m talking about one of those that the cat has dragged all over the house and played with for hours on end until it’s just this messy ball. But it’s not really a ball, now, is it? Now it’s a hopeless knot. You don’t know which loop will loosen the tangle or which one will tighten it. You might mess with it for a while until you just sit there staring at it in utter frustration, willing it to untangle itself.

That is a writer’s mind.

For the past weeks I have been following strands in every direction, hoping to loosen the knot of ideas. Silly me, I haven’t been writing some of them down! But with some, I have. Some days I just stare at all of the strands and loops and glare at them, willing the bits to just write themselves so I can get to the editing stage. Sometimes (okay, a lot of the time) I really just want to hide under a cover while everything gets itself done and things get sorted out. I want to Rip Van Winkle my way to more readers and more book releases.

I hate to tell you this, fellow Rip Van Winklers, but books do not write themselves!

I often feel like I’m unworthy of relaxation after I pound through a revision of two chapters in a novel. I mean, only two chapters? My boyfriend just lifted a 200 pound transmission with his bare hands! I haven’t done anything! But it’s all about perspective. I pushed 200 pounds of mental power, exhausting my imagination, eyes, and fingers. He ends up sweaty and I end up with a headache and a craving for some sort of unhealthy vice (since I don’t drink and I’ve quit smoking for good – 3 years without! – it’s usually a sweet, like ice cream or those disgustingly delicious Little Debbie snacks). He gets tired. I get tired. I also get crabby and sort of caveman-like. My brain is dead. He just grunts because communication is hard sometimes?

I can see now where my random train of thought is going. Writers are looked at differently than other professions. We’re ‘lazy’. We ‘don’t have a real job’. And then there is the matter of payment. No one bats an eye at $5 for bad coffee made with burned beans from some java chain, but $5 for a year of my time and effort is suddenly outrageous. It’s the same with other artistic types. We slave and bleed and cry over our craft, knowing that when we reach the end for some reason it doesn’t mean the same to other people as it should, or as it does to us.

I’ve had friends ask for freebies.

My friends ask for free copies of my book? If I have to explain why that hurts, then something really is wrong. (I’ll explain anyway. That’s like asking your friend that sells you Avon to give you that lipstick for free. It’s not free to them, guys. They had to pay for it in order to have it in stock for you to hold it. I have to pay for my paperback copies. A free eBook copy means $2 I won’t get to cover the expenses of marketing. And of course, said friend won’t likely leave a review if they even read it, so I just basically sent off $2 and my hard work in exchange for nothing.)

How do I keep my sanity?

First: What is this “sanity” thing you speak of?
Second: I have writer friends who feel my pain and we communicate to each other.
Third: I don’t let the anger or sorrow win. I am the only person that can defeat me. You are the only person that can defeat you. If you let your spirits be crushed then that’s the end, and you brought it on yourself.
Fourth: I’ve already said it before. Never give up and never surrender. Well, Tim Allen said it first, but I’m saying it now.

Chantelle Atkins posted a new blog the other day, a list of what she likes and hates about indie publishing. In the what she loves list, her number ten was “Perpetual hope that some kind of success is on its way!” That’s an important part of what we do as artistic laborers. The elusive ‘someday’. A dream you have to nurture by feeding it optimism and doing things like being active in promoting yourself on social media to show it that you’re serious about this ‘someday’ thing. But you also have to better yourself, work your craft.

So what am I doing? Being bad at social media. Hiding in Azeroth because let’s face it, sometimes I’d rather run through Suramar City in my party mask and risk it with the guards (sometimes I think they’re actually saying “An illusion! Why aren’t you writing?”), than sit down and start untangling that giant tangled mess of all the stories I’ve been building in my head. 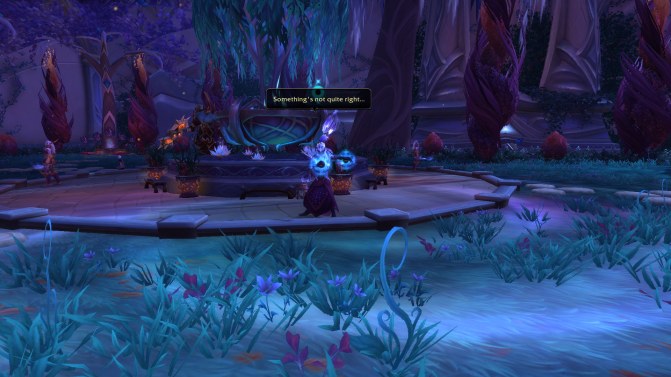 Photo courtesy of Crorinu (pictured above). May her many sacrifices in the field for the perfect shot of this guard never be forgotten. (Vanish is a lie)

Sometimes picking a fjarnskaggl (while shouting the name because it’s ridiculous. Go ahead, shout it. I’ll wait. Wasn’t that fun?) or 200 is more appealing to a tired mind than writing out the scene I’d thought up that has been playing in my head for hours or days.

But sometimes…you have to pull your head out of your ass-assination rogue (yeah, I went there) and hit that ominous ‘Exit Game’ button. Open up your writing program, your drawing program, notebook, sketchbook… and just start. Because let’s face it, starting is terrifying because what if it sucks? But once you do start? You can’t stop.

What better addiction to have than that of creating something beautiful?

View all posts by Shaymed